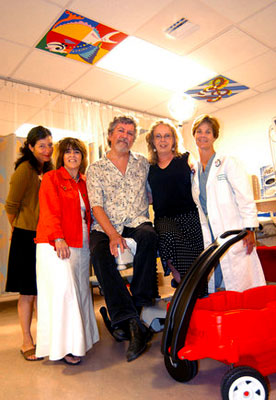 A pink octopus with curlicue arms plays the piano.

The tail of a blue-eyed stingray waves a tambourine.

These are three of 24 pictures created by local artists that thousands of children who undergo imaging procedures at Hasbro Children’s Hospital in Providence will see as they await treatment or return from it. The pictures are actually 24-inch ceiling tiles positioned in strategic places in the Center for Pediatric Imaging at Hasbro. Some tiles are at the head of the small beds in curtained bays, others are at the foot, and still more dot the ceiling of the main aisle where family and visitors can see them, too. So, a toddler lying on a bed or held in a parent’s arms can look up and see a fanciful image expressly designed to capture the attention of an anxious child.

“You have to pretend you’re the patient or you’re the parent, and these tiles have to talk back to you and say: ‘It’s OK. Everything will be alright.’ These tiles have to be calming,” said Merle Mainelli Poulton, of Lincoln, one of five professional artists who make up the Public Art Works collaborative. At the request of Paula Most, coordinator for the arts at Lifespan hospitals including Hasbro, the collaborative created the ceiling tiles, which were installed June 18. The other artists are Nancy Gaucher-Thomas and Aimee Jane Heru, both of East Greenwich, Kenn Speiser of Providence and Michele Leavitt of Saunderstown in Narragansett. Each is an artist in his or her own right, and they worked separately and together to create complementary tiles for Hasbro.

After considerable brainstorming and close inspection of the pediatric imaging center, “we created mock-ups of the ideas we were working on,” Speiser said. “We found there was no need to work the same way and be homogeneous. We have five different styles with five different voices, and that works.” Certain features naturally connect the tiles. The architect that designed Hasbro in the 1990s chose an ocean underwater theme for the hallway decorations, quite appropriate for the Ocean State, so the artists decided to stick with that. “Within the underwater theme, we wanted to incorporate music, sports and board games – Hasbro games, of course,” Gaucher-Thomas said. Some topics were taboo, as Most explained. “There are certain colors you have to stay away from,” she said. “Red is the color of blood, so you don’t want that. You want to avoid yellow because it can be a reminder of urine or vomit.” No people are depicted on the tiles because, Most said, patients don’t always like the way they look and don’t want to see exceptionally pretty or ugly people staring back at them. No activities like swimming are shown because “you don’t want to see things you can’t do,” Leavitt said. No food is seen on the tiles because many patients are on restricted diets. “You should try to take the children to another place,” Gaucher-Thomas said, “to create a comforting, pleasant atmosphere.” Speiser researched the different kinds of tiles on the market, eventually locating ceiling tiles - without holes - that would accept oil paint and acrylics, and would not be wiped clean no matter how strong the cleaning solution used on them.

With 18 full-time staff members, plus five pediatric radiologists and four nurse practitioners, the Center for Pediatric Imaging receives approximately 68,000 visits each year, according to figures supplied by Hasbro hospital. Paula Most and the five artists, with a reporter tagging along, visited the imaging center on a recent day, so the artists for the first time could meet Joan M. Holden, acute care nurse practitioner and clinical coordinator.

“Thank you, thank you, thank you,” Holden said as she hugs each of the five. “You have no idea how wonderful this is.” “Our philosophy in pediatrics is that we do not encourage an awful lot of TV,” Holden said. So, when a child is lying in a bed at the imaging center, the tiles provide a talking point for the staff and parents. “We’ll ask the child, ‘How many little seahorses do you see?’ or we’ll ask the child to make up a story about the tile,” Holden said. “The tiles are very calming, very soothing.” “Oh mom, look at the big puffy fish,” was the comment of one child after waking from sedation, according to Holden.

It took the Public Art Works collaborative about one year to complete the project, for which they were paid a total of $10,000, including a $5,000 grant from the R.I. State Council on the Arts and a matching grant from the pediatric imaging center. Most and the artists said the support of Dr. John Cronan, chief of diagnostic imaging at Hasbro, and the AS220 arts center helped make the project a reality. The collaborative, formed in 2007, intends to continue the pediatric imaging project with a second phase of 10 more ceiling tiles, mobiles, a mural and possibly a boat that children could interact with. The group also works on a for-profit basis and is currently acting as the arts consultant for Home & Hospice Care of Rhode Island, which is moving from Pawtucket to new headquarters on North Main Street in Providence.